The benefits of coconut milk

The benefits of consuming coconut milk are similar to coconut oil, if not better.

Lauric acid, one of the components of coconut milk, is converted in the body into a highly beneficial antiviral and antibacterial compound in the body called monolaurin. This helps destroy a wide variety of disease causing organisms. Hence, it is believed that the consumption of coconut milk may help protect the body from infections and viruses.

Also, coconut milk does not contain lactose. So it is a good substitute for milk for the lactose intolerant,
while being highly and naturally nutritious, rich in fibre, vitamins C, E, B1, B3, B5 and B6
and minerals including iron, selenium, sodium, calcium, magnesium and phosphorous. 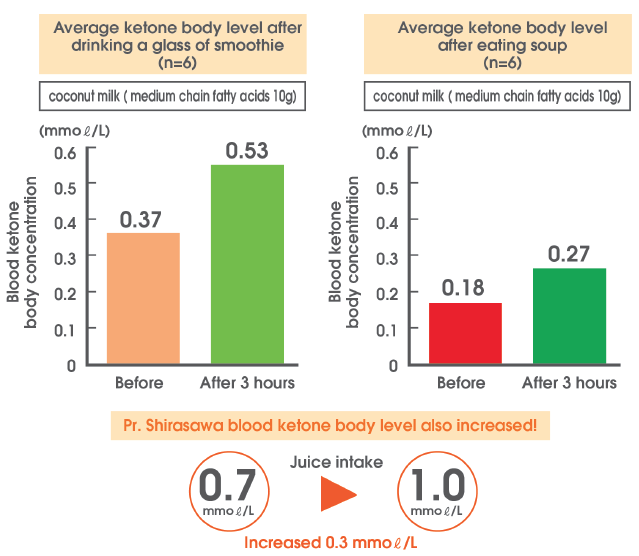 In one of my research on coconut milk in Japan, I conducted a study on the effects of coconut milk on the body’s ketone levels. This study included 12 volunteers, divided into two groups, where I first measured everyone’s ketone levels on an empty stomach.

I made sure both recipes had 66g of coconut milk, which translated into 10g of medium chain fatty acids (MCFAs). After 3 hours, I measured their ketone levels again. As in Figure 3, the left side is the carrot smoothie; while the right side is the oyster soup. The orange column is the level of the ketone bodies on an empty stomach, the green column is the level 3 hours after consumption of the coconut milk. In both groups, I could confirm that the levels went up after ingesting coconut milk. 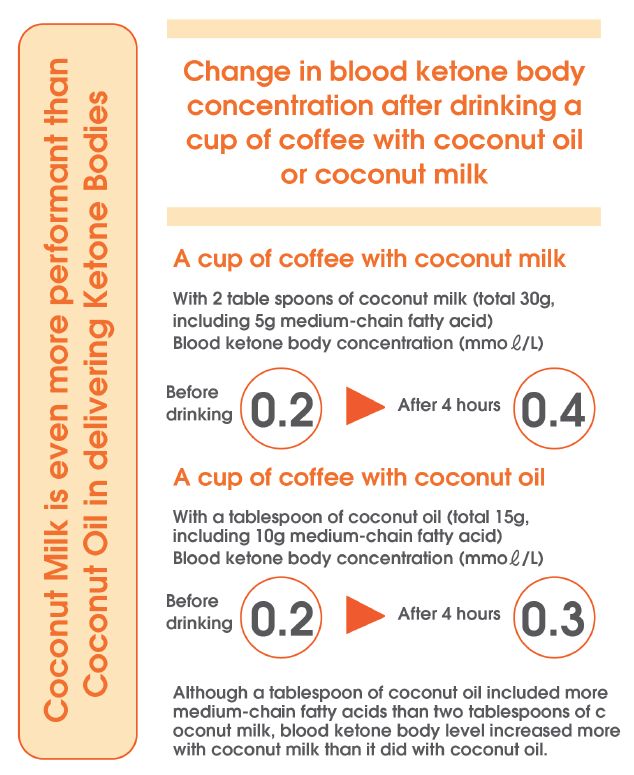 In another test, I compared drinking coffee with coconut oil and coffee with coconut milk. In both drinks, the coffee base was the same. But in one cup of coffee, I added 2 tablespoons of coconut milk (30g/5g of medium chain fatty acids) and in the other I added 1 tablespoon of coconut oil (15g/10g of medium chain fatty acids).

This experiment shows that coconut milk is actually even more effective than coconut oil in raising the ketone levels.

"All above text are direct quotes from Prof. Shirasawa book and they are presented here for information about the latest findings about coconut benefits. These information can not be seen as a recommendation to modify or alter a medical treatment. Like any other good food ingredient, coconut can bring benefits only within a proper balanced diet and regular physical exercises."